Up next in The Front Office Gallery at sfclayworks will be “Confounded Realms,”  a show that will feature a mix of paintings, and mixed media sculptures by San Francisco artist and educator, Elizabeth Medrano.

Meet Elizabeth for the Opening of  “Confounded Realms” on Saturday, March 7, 2020 from 4-6. Stop in and join us when Elizabeth is present, as it’s a great way to gain insight into her processes and intention of the work. If you are unable to come to the opening reception, the exhibit will be in The Front Office Gallery until March 28, 2020, and can be seen during open hours at the sfclayworks; Wed-Sun from 12-5pm | sfclayworks | 2240 Palou Avenue | San Francisco | CA | 94124 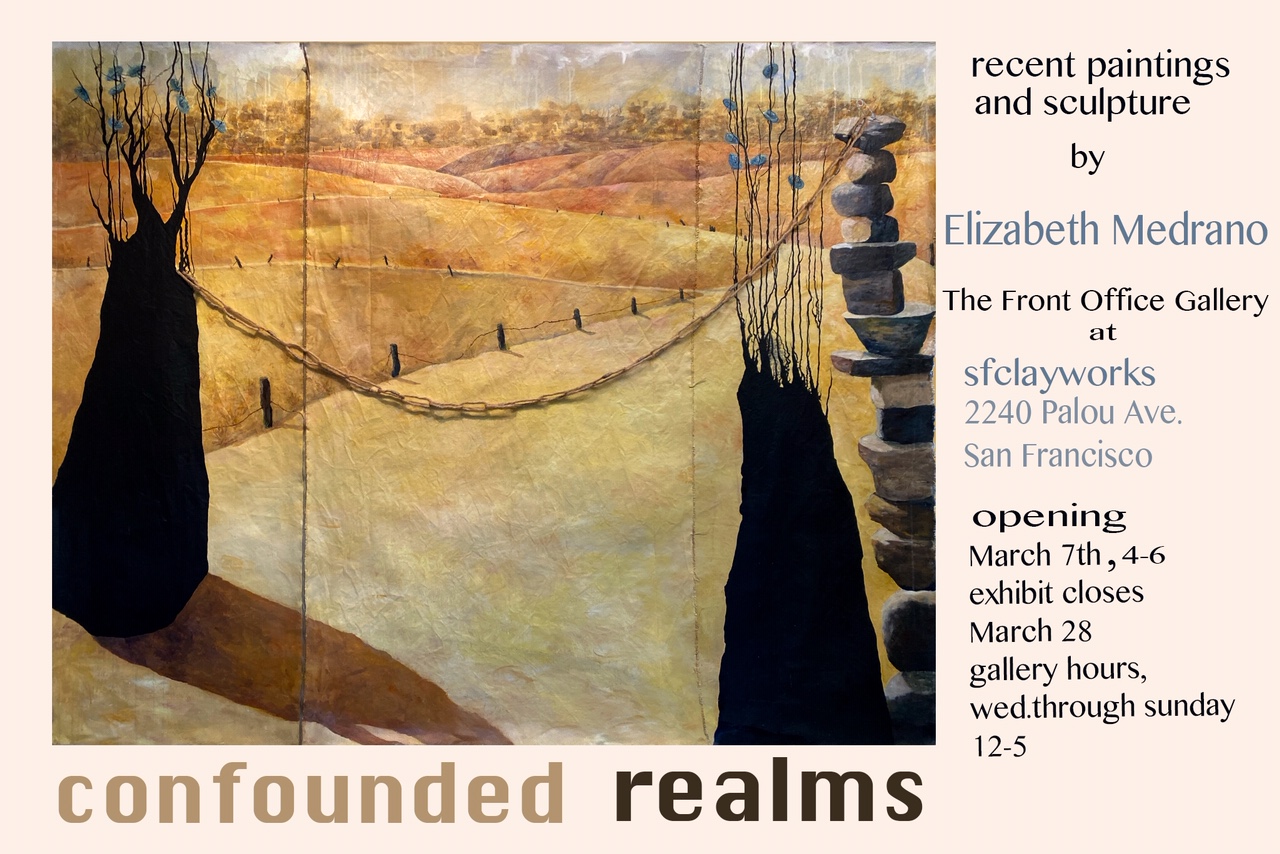 “Only After Under, Over, Begin”

The painting above, “Only After Under, Over, Begin” is part of a series called “A Measure of ImBalance”.  Elizabeth shared that this series of paintings are about boundaries. A more detailed description of the series found on her website explained how a trip to the battlefields of Gettysburg, PA influenced her. Standing amongst the stone filled battlefields, Elizabeth felt a need to explore how objects in what seemed like random groups, form relationships, and make unintended arrangements that narrate a story. These juxtapositions engendered feelings for her about social perceptions, group action and reaction, which she wanted to explore more closely.  It ultimately became an investigation of the social theory of rocks, of hidden stories, emotions, and unfolding memories.

Besides her paintings, Elizabeth will also be showing her mixed media sculptures which are a part of her series entitled, “Bone Growths,” a series of small sculptures made of anatomical, imperfect, resin, reject bones and their connections to us and the world through their character and dispositions. 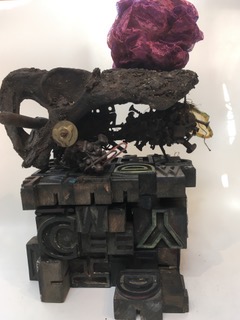 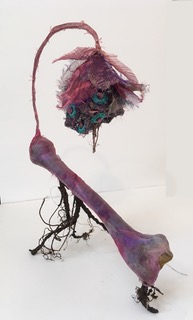 Through sculpture, drawing, and painting, my artwork investigates the relationships between people-made objects, objects in our natural world, and the predictable and unpredictable forces that act upon them through our behaviors. My work explores an object’s original use with an envisioned transmutated function to engage new associations between found, adapted, and possibility. It draws attention to the way we have altered how our world was put together, and the potentiality of behavior.

Elizabeth Medrano is a mixed-media sculptor and painter living and working in San Francisco. Following her Quaker high school experience, she attended the University of Southern Maine, Tyler School of Art and graduated with a BFA, with Honors, from the Philadelphia College of Art. A trip to her family in Bogota, Colombia, sparked an impasse which resulted in a relocation to San Francisco, an MFA from SFSU as a Distinguished Graduate in Sculpture, an MA in Special Education, and years of work in SF public schools.

Medrano has exhibited her work throughout the Bay Area in such places as the Peninsula Museum of Art, SHOH Gallery, the Jewish Museum of SF, De Saisset Museum, Richmond Art Center, Sanchez Art Center, Cerro Coso Community College, and Chabot College, among other galleries and cafes.  She received grants from the California Arts Commission, awarded a residency at Edna St. Vincent Millay, and was a lecturer at SFSU. Medrano maintains a studio in San Francisco and still works in public schools.

See you at the opening!!!